There's this great new Wellington website called Our Living City. It is a place where people can post about their experiences in Wellington and the uniting theme is the environment in this great city.

If you have had a chance to borrow a wünderbike please let the world know what you think! Why do you ride? What do you like (or not like) about cycling in Wellington?

We submitted a little story about the beginnings of Wünderbike.
Take at look! Wünderbike on Our Living City
Posted by Anonymous at 10:31 PM 1 comment:

Hey friends,
Wünderbike is officially open to the public. Visit our membership page to find out how to rent our free bicycles.

We showcased the bicycles at Wellington's first Ciclovía last weekend. Three of our bikes were rented out to Wellingtonians for the event. Thankfully it was a stunningly gorgeous sunny wünderful and almost wind-less day.
Here are some photos for your viewing pleasure. 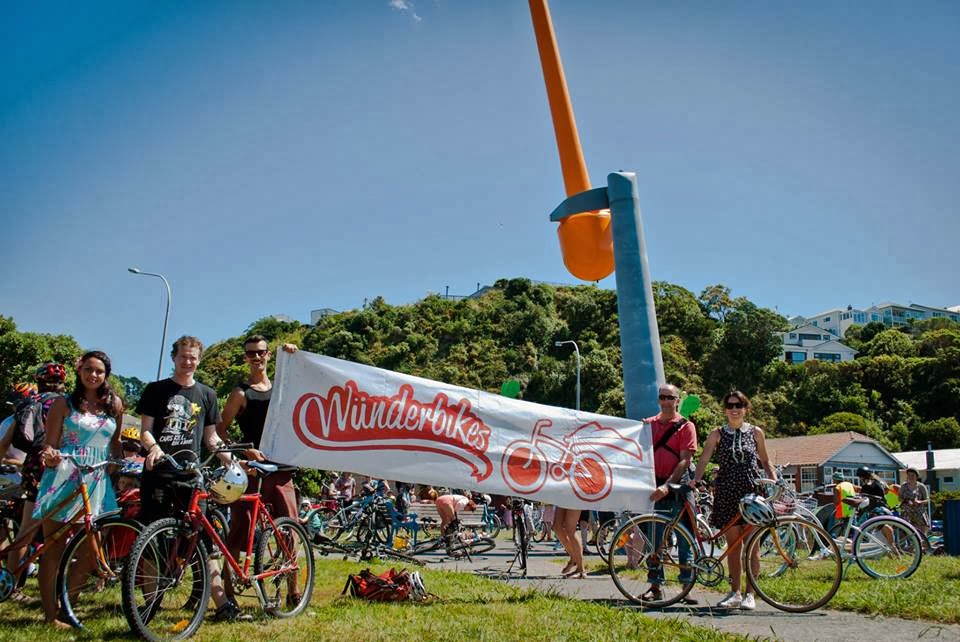 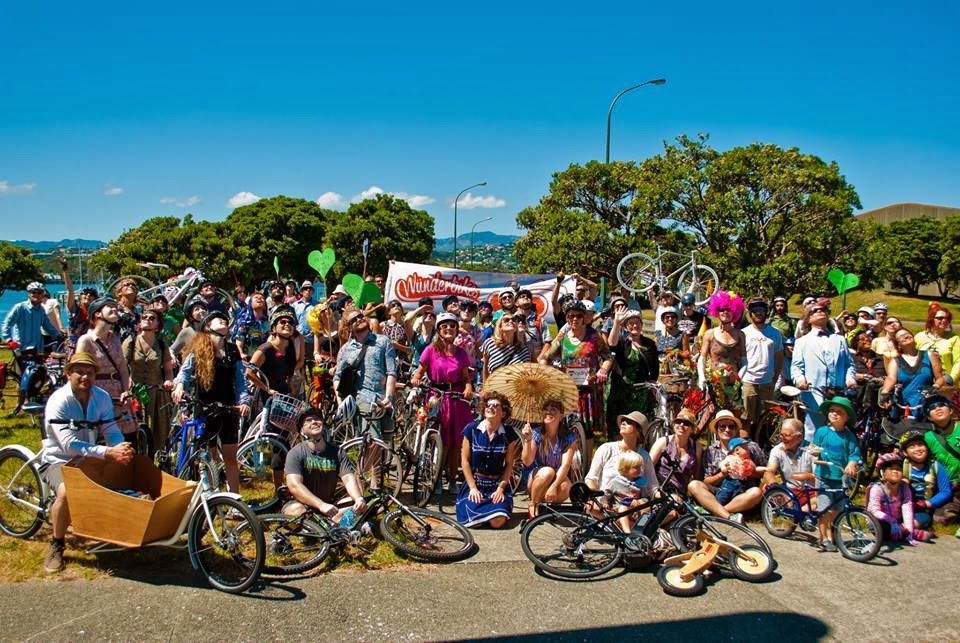 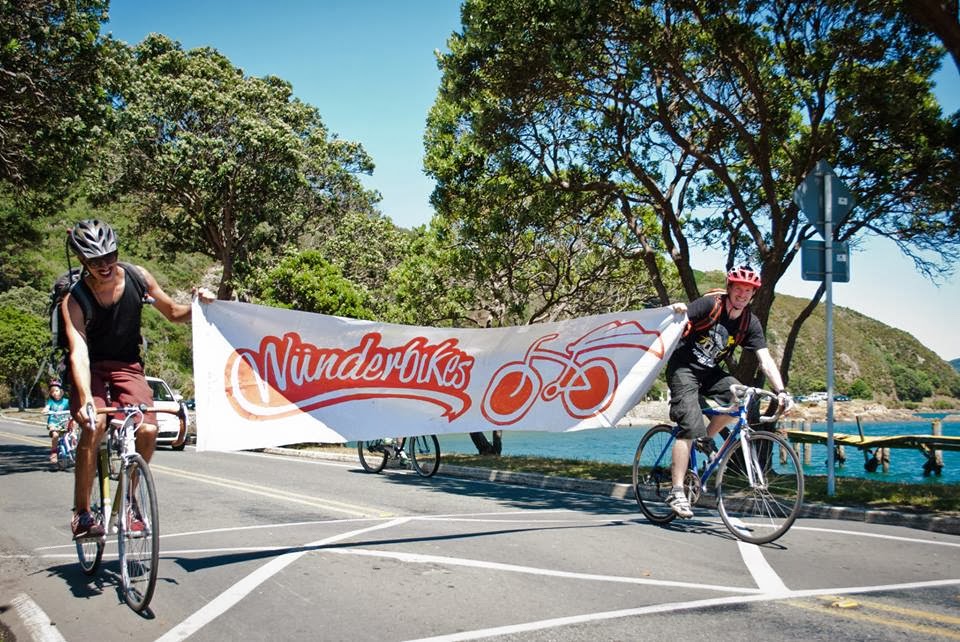 Hot off the press!

Have a read through this week's article about Wunderbike in the Dominion Post!


Residents and visitors of Wellington will soon be able to pick up a bike and ride around the capital without it costing them a cent.

Volunteers at the Aro Valley Community Centre have developed Wunderbike, a community bike-sharing programme similar to the white bikes in France or yellow bikes in Amsterdam.
The group's Pledge Me campaign met its target in five days in December and continues to receive pledges towards the scheme, which will run on the basis of people registering and borrowing a bike for free for up to one week.
Sylvie Froncek, a Wunderbike organiser, says the idea is to promote cycling by making it accessible to everyone.
"We used to have the community bike shop and we would lend some out to people but they went missing and weren't well maintained so it stopped," Froncek says.
"One of the mechanics thought it would be cool to get the bike-sharing thing going again because people come by all the time asking if they can be lent a bike."
Froncek, who came to live in Wellington from America last year, says she also hopes Wunderbike will give people a chance to give cycling a go without making the investment of purchasing a bike, helping the cycling community to widen and become more accepted.
"It's also getting people who otherwise wouldn't have a chance to try it out to do so, and cycling really is the best way to see Wellington."
Froncek's philosophy is that cycling can truly help people to be happy and healthy, with emotional, physical and mental benefits, she says.
Jesse Doud, also a Wunderbike organiser, says he hopes the scheme will particularly help visitors to Wellington.
"The first thing I look for in a new city is how am I going to get a bike so I can get around and it makes me happy to think people can now think: 'I'll go get a Wunderbike'."
Doud helped to found Bike Farm in Portland, US, and Bike Kitchen in Adelaide. He says he feels Wellington is becoming a better place to cycle and he hopes ventures like Wunderbike will help move cycling into becoming more of a normal part of Wellington life.
Froncek says that Wunderbike also promotes safe cycling, providing helmets, lights and teaching new cyclists how to ride safely and successfully around the city.
Wunderbike's launch at the Aro Valley Community Centre will be in February but a date has not yet been set. See facebook.com/WellingtonWunderbike for updates and more information.

Wunderbike Article on stuff.co.nz
Posted by Anonymous at 2:05 PM No comments:

We just had a great meeting about Wunderbikes so we figured we should fill you all in on the latest news.

First of all, big thanks to Garage Project and Pete's mom for pledging the awesome amount of $100 to the Wunderbike campaign, as a result both parties will get to name a bike!

Thing two, we took the Wunderbike project for a little test ride (two women borrowed the bikes for a few days). Some of us were fortunate enough to bump into them unexpectedly at multiple locations around Wellington. The wunderful test subjects enjoyed their biking time and expressed great enthusiasm for the project and then they returned the bikes to our temporary Wunderbike parking spot outside of the Mechanical Tempest!

And last but not least, our WUNDERBIKE LAUNCH DATE is set for February 16th. It will happen in tandem with Wellington Ciclovia and in collaboration with our friends at Frocks on Bikes. More information will be coming soon.


Posted by Anonymous at 2:57 AM No comments:

Pledge Me! Join the Wunderbike campaign

Hey guys, it's the big day! Our PledgeMe is off and running, and we need your loving support so we can get our bikes out into the world safely and with panash! Make a pledge here, and we'll love you forever:
Wunderbike Pledge Me

Posted by Anonymous at 7:20 PM No comments:

The gang got together this weekend and worked on a few more wunderbikes. And we have photos to prove it!

And if you want to know more, here are the latest project updates:

-We are meeting with a graphic designer this week!

-Donations of bike helmets, lights and locks are still be collecting and we are contacting local bike shops for spare stuff.

-The core group is meeting Friday to get some new wheels spinning, if you know what I mean...
Posted by Anonymous at 3:46 PM No comments:

Keen to learn how to take a bike apart?
This afternoon around 2pm we will be getting together at the mechanical tempest, 128 Abel smith st to disassemble some bikes, sand down the paint and then repaint them to match our fleet of red and yellow Wunderbikes.
Anyone who wants to learn is welcome to come by, expect to get a little dirty....
After we've stripped the bikes down we will take them to Aro park to be painted.
Posted by Anonymous at 2:31 PM No comments: